14 EPIC Pranks Made Through History 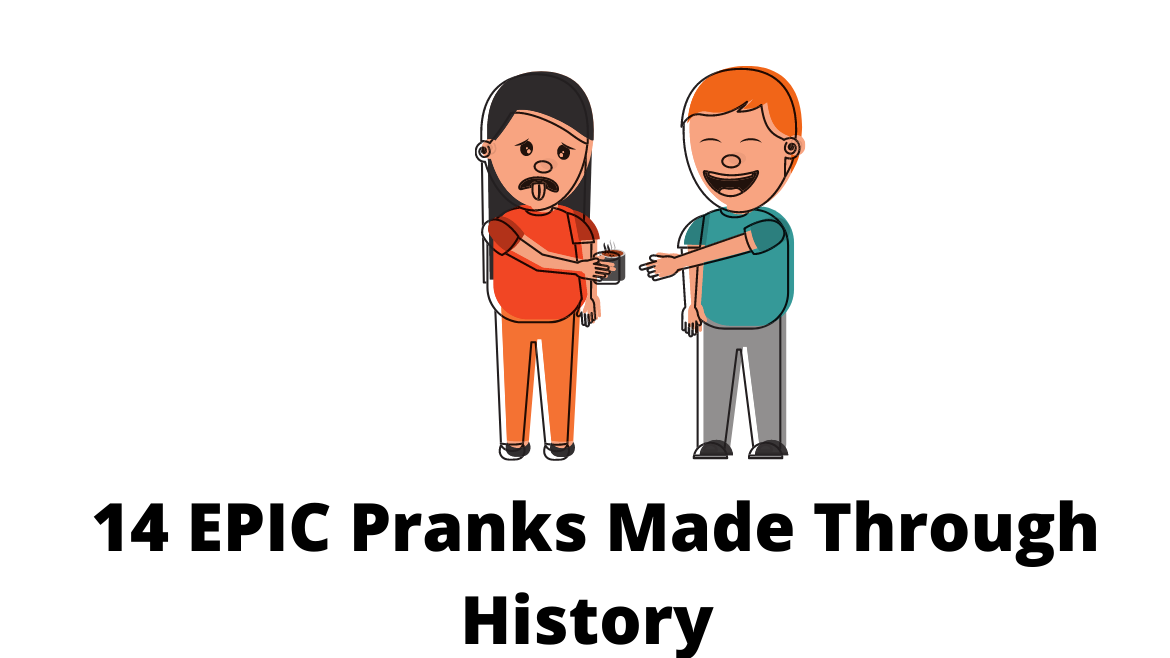 14 EPIC Pranks Made Through History

Long before the crazy pranks are shown on gag shows on TV, people have been finding ways to make themselves laugh. There’s no history of the first joke ever created. Humour is inherently embedded in our humanity. Some sources even say that people have been laughing even before we’ve developed a language system. This makes sense because even babies who know so little about this world can laugh in a wholesome and high-pitched tone. It’s not a skill that humans need to learn. Laughter and the desire to laugh have always been there. There just needs to be a trigger to make people react this way. And because we like to laugh, we’ve made so many practical joke attempts to incite laughter in other people even as early as the Greek civilization. We’re pretty sure pranks existed way earlier than that but just wasn’t recorded. But for this article, we tried our best to list the 14 best ones in history! These pranks are from different times in different parts of the world. If you want to know, just keep on reading!

One day, our present times will be part of history, so you need to make the most out of this moment by living in it! You have to make the most of what’s newly available before they turn into an unfunny cliche when it comes to pranking. Thank heavens for Ownage Pranks’ prank calling app because they offer over 100 automatic pre-recorded pranks calls. This means you’ll have many choices to make a new prank to any victim that you like. Don’t worry about getting caught because Ownage Pranks cares about your privacy more than other prank call apps out there. They’ll provide you with an anonymous caller ID when you make the calls, so you can have as much fun as you like. Plus, the pranks come with believable soundboards and are voiced by professional actors.

Did you think that all monks do is meditate and be wise? Well, that wisdom can be put into some playful use back in the 15th century. For example, a monk at Syon Abbey in England named Thomas Betson can be considered one of the first illusionists slash pranksters in history! One time he put a beetle inside an apple for people to see it weirdly move back and forth. He would also use a thin strand of hair and some wax to let things like eggs float in midair!

Willian Buckland, a palaeontology and feces expert in the 1900s – didn’t think it was enough only to write it in his research paper to prove that guano was the next best lawn fertiliser at that time. He needed physical proof of it for everyone to believe. So one day at Oxford, he showered the grass with bat guano and spelt the word GUANO. People think this was only a nuisance from a bored Oxford man, so they cleaned it up. Weeks later, the word GUANO grew out of healthy grass. Who’s to say that guano isn’t an effective fertiliser now?

The rich and educated have a way to prank so well that people are still getting fooled even centuries later! A Cambridge man named Philip Yorke and his friend Thomas Birch used their wealth and education to print a prank newspaper called The English Mercurie in the 1940s. The printed issue was dated back in 1588 – meaning, if it were true, it would have made it one of the oldest printed publications in the world. But of course, it doesn’t end there. Yorke and Birch forwarded the paper to the British Museum, which treated the newspaper as a legitimate artefact for DECADES! Some people still use this fake publication as a legitimate source of information. If you’re going to ask us, that’s an astronomically epic pranking level right there!

There are a lot of peculiar things that people will believe if their trusted source tells it. One of these is spaghetti growing on trees! In 1957, the BBC pulled a prank on its current affairs program Panorama by showing a three-minute video of Swiss farmers harvesting spaghetti strands on trees. Those who aren’t regular eaters of pasta even asked how to grow spaghetti trees on their own. Well, wasn’t that a delicious prank well-served?

Can you imagine Big Ben going digital? The BBC can! BBC News announced in 1980 that this iconic London landmark is going to operate as a digital clock. It was also announced that its hands would be given to the first people who will call. A Japanese seaman had a game face and immediately called for his prize. The brits, however, were not exactly happy about this.

College students are a different breed of pranksters. Maybe it’s the madness from all the exams and information overload, or it’s the vast distance from their parents and guardians – but they sure make the most outrageous pranks! In February 1979, two University of Wisconsin students named Leon Varjian and Jim Mallon promised that they will move the Statue of Liberty to Lake Mendota. The duo won the election and had to do what they promised to do. They had to build Lady Liberty out of plywood, papier mache, chicken wire, and a muslin cloth to leave at the promised lake for people to see. It took them three days and $4000 just to pull this elaborate prank off. Talk about dedication, huh?

Elagabalus may be considered one of the most incompetent Roman emperors, but he should be given credit for his creative stunts. Before farting sounds, Elagabalus already used whoopee cushions for his guests to sit on and make loud farting sounds. He would also use wild animals such as lions, bears, and leopards; and put them inside the quarters of his guests staying the night. He also thought it would be funny to release snakes out in public randomly. You may think that this emperor is probably acting like a child with these antics of his – but it’s true. He is a child. He was only a teenager when he started ruling. Do you know what happens when you let a kid lead? It turns a kingdom into a circus!

National Public Radio had a way of triggering its audience. In 1992, they reported that former president Richard Nixon would run as a Republican president. They even played a clip of him saying, “I never did anything wrong, and I won’t do it again.” But, of course, given his reputation on his involvement in the Watergate Scandal, people were outraged and called NPR for more information about it. Thankfully for these people, it was only an April Fools joke that the comedian Rich Little pulled.

People in history must have a lot of fun with April Fools jokes because, in 1962, Sweden’s television network called SVT made the Swedes believe that they can make a black and white TV into a coloured one with just a few steps. First, they had a fake technical expert utter technical buzzwords on how to make a black-and-white TV. Then, the point was to let the viewers grab some nylon stockings and stretch them over to the TV’s screen. After that, people needed to move their heads side-by-side for the best results. Poor swedes!

Don’t mess with an architect because they surely know how physical spaces work and manipulate them! Take Anthemius of Tralles, for example. This 5th-century Greek architect quarrelled with Zeno, so he decided to pull off a fake earthquake. All he did was connect a hose to Zeno’s door and “lighted fires under his boilers.” Of course, it was said that the steam produced by this would create a fake earthquake.

Sometimes, pranks go way out of hand, and this is one of the examples. On March 29, 1962, a Dutch artist named Edo van Tetterode sculpted an Easter Island artefact’s replica and left it on the beach for people to think that it was washed away. His plan was successful, and the “artefact” attracted an expert from Norway, which confirmed that it is indeed an authentic Easter Island artefact. It gained a lot of clout from the townspeople that it was even left out for the public to see. Yikes! Tetterode had enough of it and confessed to the elaborate prank he made that went too far.

This is one of the April Fools pranks in history that floated! On the 1st day of April in 1978, in Sydney, Australia, people were shocked to see a gigantic iceberg casually floating around Sydney Harbour. Days before this, Dick Smith announced that an iceberg from Antarctica would be making its way to Sydney in about a week. Later, a rainstorm revealed that the “iceberg” is nothing but white plastic and fire-fighting foam.

If you read an article about the moon’s civilization, you would immediately think it’s a satirical or fictional column. On August 25, 1835, The New York Sun tried to publish a satirical article like this – but hilariously backfired. They wrote that an English astronomer studied the moon and saw pyramids, unicorns, vegetation, human-like creatures with wings, and even bipedal beavers! The main intention was to make fun of writers who unironically claim that the moon is home to 4 billion aliens. If the New York Sun thought this story would fly the way they expected, well, they are wrong. People were far too susceptible back in the 1900s that they took this as a fact. Well, that’s an example of a satire that failed to fly.

School pride is one thing that drives college students to participate in competitions, even if they’re not a part of it. In The Great Rose Bowl Hoax of 1961, Caltech spelt out their school’s name in the stands even though they don’t have a team to compete. That’s a lot of support for something that doesn’t exist, isn’t it?

Treat this as an informal history lesson in the game of pranking. One way to be good at what you do is to appreciate where it came from. So if you are a prankster, we hope you learned a thing or two from this list! If not, then you may be at least entertained or amused by how far people’s creativity can go. You can do it yourself if you want to. If not, living vicariously through other’s experiences can be just as fun. They say today’s news is tomorrow’s history, so If you want to be more present and be up-to-date with recent trends, information, and leaks – you can learn how to do that here.

Why are Second-Hand Bikes Popular?

What Are Some Important Things to Know About Katana Swords?

How to win real money online from home?

Plan Your Next Movie Night and Watch the...

Avoid These Common Gambling Mistakes When Playing in...

What Are MMO Games? The History of Online...

Is Online Casino Legal in Singapore?

Trollishly: How To Locate Yourself Possibly On TikTok...